Shining a Spotlight on Federal CIOs in Cybersecurity

Federal agencies face cyber threats from every angle. While there is significant work to be done, we see promise in cybersecurity leaders who are pressing forward to elicit change and push for progress. Here are a few that Federal Technology Insider would like to recognize, not only for their work to date, but also their visionary leadership in addressing new and emerging threats to our nation’s security.

It’s not going to be an easy task but Jeh Johnson is ready to tackle cybersecurity efforts for the DHS. In October, President Obama nominated the former Defense Department General Counsel to succeed Janet Napolitano as Homeland Security Secretary.

Johnson was the lead lawyer at the Defense Department when the military stood up the Cyber Command and the DHS and DoD developed a joint strategy to defend government, military, and industrial critical IT infrastructure.

“He’s been there in the Situation Room at the table in moments of decision, working with leaders from a host of agencies to make sure everyone is rowing in the same direction,” Obama said during his announcement in a Rose Garden ceremony. “And he’s respected across our government as a team player, somebody who knows how to get folks who don’t always agree to work towards a common goal.”

Dr. Patrick Gallagher, Under Secretary of Commerce for Standards and Technology 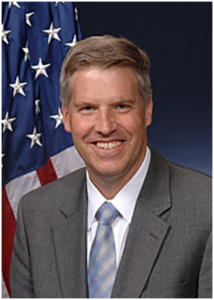 Director, Office of the Director, NIST

In February 2013, President Obama issued an executive order for cybersecurity to promote information sharing and protection.  One of the main elements of the order included a Cybersecurity Framework to develop standards for mitigating risks and sharing public sector cyberattack information with the private sector.

Dr. Patrick Gallagher, 4th Director of the U.S. Department of Commerce’s National Institute of Standards and Technology (NIST) and Under Secretary of Commerce for Standards and Technology, has headed this initiative. This summer, he reported on the progress during an exclusive Q&A with Federal Technology Insider. “Developing this Cybersecurity Framework is a difficult, complex task. We need the full support and participation of all sectors of business and industry providing critical infrastructure to do this right,” said Gallagher.

Gallagher took on the challenge and not even the government shutdown could slow down the process.  The framework was released in late October.

The Task Force Cyber Team at the HQ Army Materiel Command, led by Wendy Huskey, embarked on an effort to educate more than 70,000 military and civilian employees on information security. This training has enabled the command to become the second –  best trained and certified compliant command –  that steadily maintains a 98 percent overall information assurance training and certification compliance rating.

In support of the National Cyber Security Awareness Month, the Task Force Cyber goal was to educate and encourage users to pay more attention to their actions in cyberspace and how these actions could be perceived by potential adversaries.

“How do you protect the information once the employee walks out the door?” asked Wendy Huskey. “That was the question we thought needed to be answered so our training material had to have the objective to identify risks employees face both professionally and personally, and to take appropriate actions to protect themselves, their families, and the operational mission.”

To keep AMC employees apprised and to build awareness of cyber- related topics, a “Cyber Daily News” newsletter is compiled each morning of the standard workweek, filled with cybersecurity and computing news. The distribution includes AMC staff and recipients from the U.S. Air Force, U.S. Marine Corps, and the U.S. Army.

Huskey was honored for her achievements as part of the 2013 Government Information Security Leadership Awards.

General Keith Alexander is no stranger to controversy. In fact, the Edward Snowden leak and privacy issue has had him in the spotlight a great deal. Yet he believes that “NSA’s primary responsibility is to defend the nation.” While controversy in the media often clouds other news and IT initiatives, the agency is staying true to its mission to protect and defend. Federal Technolog

y Insider profiled the agency’s IT successes a few months back.

Alexander continues to defend NSA actions and, in fact, has called for greater communications and sharing between the government and private sector to better defend against cyber attacks.  He credited intelligence’s data gathering and analysis with preventing at least 54 terrorist attacks in the U.S. and overseas since the Sept. 11, 2001 attacks. “We’re going to have a debate in this country on do we give up those tools,” he said. “I’m concerned we’re going to make the wrong choice,” Alexander was quoted as saying in a recent UPI story.

Obama Looks at IT Procurement

IT Modernization and Consolidation Adding to Federal Government...

Does Improving Federal Cybersecurity Begin with Improving the...

Giving the Department of Transportation an IT Overhaul

What the Government Shutdown Could Mean for the...