From Federal Chief Information Officer Steven VanRoekel touting the use of data to make IT more effective and efficient to NIST’s plans for a new research center, it has been a very busy week when it comes to federal government innovation.

Be sure to check out this news and much more in the latest Federal News Round Up post from Federal Technology Insider.  Happy Monday.

NIST Announces Federal Cyber Center Plans
The National Institutes of Standards and Technology is spearheading efforts to establish a new federally funded research and development center through its National Cybersecurity Center of Excellence.

Senate Confirms New OMB Director
Sylvia Mathews Burwell will now serve as director of the Office of Management and Budget, the first Senate-confirmed chief since now-Treasury Secretary Jack Lew left the post to become Obama’s chief of staff in January 2012.

DoD Issues Directive to Define CIO Role
The Defense Department on April 22 issued a new directive outlining the roles and responsibilities of the Pentagon’s chief information officer, updating nearly decade-old governance to include some of DoD’s most pressing concerns.

Coming Soon: Defense’s New 100-Gigabit Supercomputer Network
The Defense Department is stitching together its supercomputer centers with a 100-gigabits-per-second network.

NASA Released a Magical Time-lapse of 3 Years of Solar Beauty
For three years, NASA’s Solar Dynamics Observatory has been orbiting our planet, keeping its watchful eye on our sun, a star in our own backyard.

Open Source Eases the Transition to the Cloud

How to Use IT to Spur Innovation and...

Obama Emphasizes Security in State of the Union;...

Cloud is the Foundation of IT Modernization: Strategies...

Federal News Round Up: The Future of Warfare...

Software Defined Networking: Here’s What You Need to...

Building the Foundation for Virtualization: What Federal Agency...

DISA CIO: Moving to Cloud Computing is a... 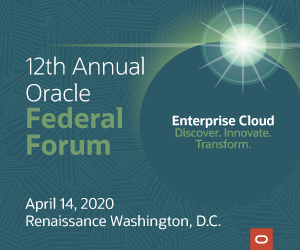