by GTI Editors
in CIO Perspective
Reading Time: 3 mins read
A A 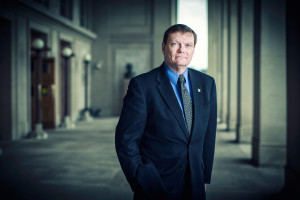 At FedTalks, a day-long event looking to do for government IT what TedTalks do for the broader world of ideas in all fields, Terry Halvorsen, acting CIO for the Defense Department (DoD), covered in just 20 minutes several of the initiatives DoD has under way.

Halvorsen described how the biggest challenge in IT is not the technical aspect, incorporating new technologies, but cultural.  In his experience the core IT challenge is  ”how to get people thinking differently about IT – the data, the processes, [and] the things that might have to change in your environment.”

Based on what he’s seen during his tenure both at the DoD and previously as the Navy’s CIO, Halversen is some what of an expert in managing cultural tensions within his complex organizations.  Take the example of what mobile devices personnel should be able to use at work.  Where the traditional route has been to only use government-issued Blackberries and smartphones, Halvorsen and his team had to navigate their way between security and the realities of how their end users work.

“That’s a big thing for us to do. It’s an admission that our workforce, civilian as well as military, and the ‘less experienced’ – a way to say younger – [are] demanding different things from their lives,” he said. “We have to put mission and security first, but we have to accommodate in some ways.”

Similarly, Haloversen recognizes that the cloud presents a huge opportunity for the DoD to meet its customers’ needs.  As well as serving their core of military customers, Halvorsen recognizes that “ many of our customers need to use our data, and guess what? They’re not [in] DoD.”  For instance, the Defense Department is “just a little bit” in the medical business, Halvorsen said – to the tune of $235 billion in expenditures – but many medical transactions are not within the military organization.

Halvorsen also discussed the Joint Information Environment (JIE), a major initiative being pursued by the DoD.  The Joint Information Environment, the initiative that DoD is pursuing, “is a concept, not a thing,” he said. Within JIE, there are discrete,  affordable, measurable programs, all intended to work together and provide a common picture for all the service branches, Cyber Command, DISA, and all the Defense agencies. The Joint Regional Security Stacks, one such discrete component, is intended to create a more coherent and singular security architecture.

Another major initiative, also part of JIE, also is underway, to find ways to provide various coalition partners with access to information.

“Picture a virtual box, a boxed-up network that anyone can join… and anyone can afford to build. How do you build this network so that some of our newer allies, newer coalition partners, with smaller economies, [so] they can play?” Halvorsen said. “[You] focus around commercial pieces, including commercial encryption. You get to work at some level slightly above classified, that [we] only have to secure for parts of the time.”

Finally, he said DoD is thinking about ways to strengthen sharing across both governmental and industry boundaries.

“How do we share some of what we’re doing more with industry?” Halvorsen said. “I think there are some things going on the civilian side that we should adopt, [and] some things Homeland Security is doing. [By] spring you’ll see us establish some better ways to establish that exchange.”

Federal News Roundup: When it Comes to Federal IT, the Future is Now