by GTI Editors
in Digital Transformation
Reading Time: 4min read
A A

What happens when you get twenty of the federal government’s top IT professionals together in the same building along with technologists and thought leaders from the some of the most innovative companies in the business?  In short, you get an explosion of ideas, the development of best practices, and the inspiration to return to your own team and implement all that you’ve learned.

That was certainly the prevailing spirit at the recent Federal Forum held in Washington, D.C.  where agency IT leaders and leading minds from Brocade, Northrup Grumman, and Harris Corporation met with IT practitioners from across the government to talk about the Federal Data Center Consolidation Initiative (FDCCI), data center optimization, and the technologies, like Ethernet fabrics, and software defined networking that will make data center consolidation possible.

With the 2015 FDCCI deadline fast approaching, we know that many agencies are still grappling with how to meet the requirements and do their part to eliminate 40 percent of the 3,100 government data centers.  The problem that most agencies are facing is that they have addressed the low hanging fruit by eliminating redundant or under utilized data centers, but now comes the hard work of finding areas that can be fine tuned to bring further improvements in efficient data center usage and keep the consolidation on track.

Brocade’s CEO, Lloyd Carney, started the morning keynote by acknowledging how much some aspects of technology have changed, but how the network layer “really has stayed the same.”  Everywhere you look there are advancements in technology, advancements in provisioning, advancements in cost. The network layer really hasn’t advanced. The network complexity that is inherent today doesn’t have to be there.”   The single most important capability is the “ability to expand or contract your environment on the fly…to be able to turn the knobs quickly [because] you don’t know where your next big demand will come from.”

It was this theme that reverberated throughout the day in the breakout panels particularly in a compelling track on data center optimization with Bernard Mazer, CIO of the Department of the Interior, Wolf Tombe, CTO of Customs and Border Protection, Department of Homeland Security, and Louis Charlier, Director of Enterprise, Department of Labor.

Steve O’Keeffe, Founder of MeriTalk, hosted the panel and began discussions by referring the audience and panel to an illuminating chart on the current state of data center consolidation.  What is immediately obvious from ‘The Big Squeeze Findings’ is that most federal agencies have begun the process of data center consolidation, but that a majority of agencies do not think they’re doing enough, nor are they entirely convinced that their efforts at consolidation will be repaid in the end. 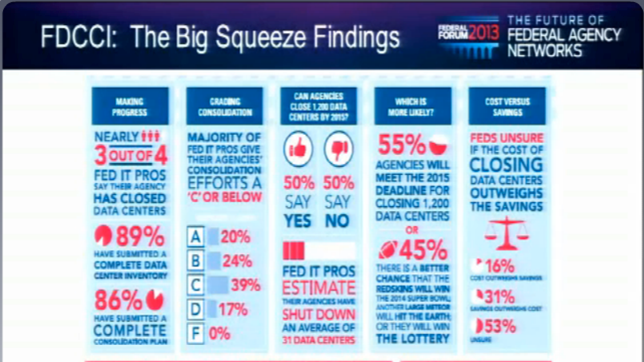 The chart provided an excellent starting point from which the panelists could highlight the best practices their teams have learned on their agency’s journey towards data center consolidation.  Even though each panel member had a unique perspective based on their own agency’s starting point there were three common themes:

The good news, which is also the bad news, for those leading data center consolidation efforts is that it’s a highly visible area where success or failure is easily measured in terms of the number of data centers still being operated by an agency and the utilization rates of data centers still in operation.   The 56% of agency IT leaders who currently rate their FDCCI efforts in the ‘failing’ grade range would do well to start taking notes from the Departments of Homeland Security, Labor, and the Interior.